"Door man is roaming the facility! Be wary!"

The Doorman is a sentient and violent medium-threat humanoid anomaly contained in Light Containment. The entity has a very slim body and has 20 teeth covering its entire face. Somehow, it has a piece of cloth covering the pelvic area of the humanoid's body.

The Doorman waits behind doors, and when said door is opened, it will attack the opener and quickly run away. This knocks the opener to the ground for 3 seconds, deals 20 damage, temporarily blurs the player's vision, and empties the player's stamina. However, it is typically easy to determine which door the Doorman is hiding behind, due to the anomaly's constant, loud, and heavy breathing.

Doorman's storage closet isn't really a "containment" chamber, it is just a place where the Doorman "retreats" to. The Doorman resides in what used to be a Storage Closet. The Foundation labeled it as it's "Main Area" though not actually being able to contain it. Its storage closet is littered with coffee cups, presumably stolen from personnel, judging from the Coffee Thief badge. Despite having a large storage closet, the Doorman prefers a small room in the back of the Storage. Once "released", the Doorman will attack the releaser (Chaos Insurgent / Prisoner) and will run off to randomly spawn behind doors. Due to him being immune to Weapons, he will naturally return to its containment after 20 minutes or by being re-contained by the Omega Warheads. 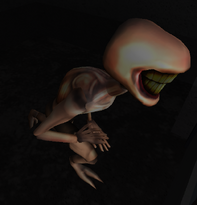 Doorman in its room

The storage inside Doorman's containment chamber
Community content is available under CC-BY-SA unless otherwise noted.
Advertisement