The Eye Pods are a pair of teardrop-shaped creatures, with a single blue eye in the middle of their bodies. There are two Eye Pod variations, Eye Pod-A is burnt orange in color while Eye Pod-B is mustard yellow.

They are very calm creatures and have a dog-like attitude. They will roam the facility when released, occasionally following the nearest players. When bonding with other players, Eye Pods will release a heart effect. After interacting with the player for a couple seconds or minutes, they will leave, and will bond with another player.

Due to the Eye Pods anomalous ability of never having to blink, they are useful against The Sculpture. If they encounter the Sculpture, they will only look at The Sculpture for a couple minutes before they leave.

If they encounter other Medium - High Threat Anomalies, excluding The Sculpture, they will quickly escape and evacuate.

Eye Pods containment chamber is a wide area room that requires Level 1+ Keycard Access or the Skeleton Key. Water containers, sleeping boxes, and mats are always prepared for Eye Pods so they can live comfortably. Due to its unharmful behavior, Foundation, or other teams, are allowed to release the anomalies.

Currently, there is only one badge related to the Eye Pods.

Eye pod-B Staring at The Sculpture 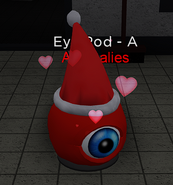 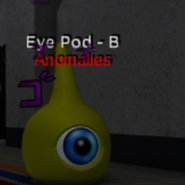