Weapons
The Fish Man, or otherwise known as Mr. Fish, is a humanoid low-threat Anomaly contained in the Light Containment Zone. He was added in the Big Content Patch alongside the Doorman and two other anomalies. It is one of the playable anomalies.

Fish Man wears a black suit and a top hat. Fish Man's only anomalous trait is its fish head, resembling an yellow with white stripes clownfish. This anomaly is one of many people's top-rated favorite anomalies, since it shows peace, and does not kill or fight back in any possible way, but will run fast when hurt, but this only occurs with NPC-Controlled Mr. Fish and not Player-Controlled Mr. Fish.

Fish Man's containment chamber is a wide office room with 2 sides of glass wall, the chamber has basic furniture, such as a desk, a chair, a bed, and potted plants.

Fish Man has a Pearl inside its containment which can be sold to Marshall Carter Dark Agents. Obtaining the Pearl requires Mr. Fish to breach, then the player heads to the containment chamber where the Pearl is located. There is only one Pearl at a time in its containment, and the Pearl itself shows no anomalous properties.

Currently, there are 3 badges related to the Fish Man, those are:

Mr. Fish walking around the facility 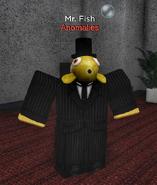