Suit Man can be seen in two different places

The Foundation has two elevators. One is around the Mobile Task Force Armory leading to Heavy Containment. The other elevators lead to the Surface from Gate B and require a Level 3 keycard to access. 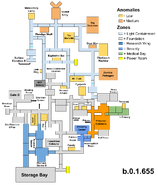 Outdated Map of Foundation, Research Wing, and Security together 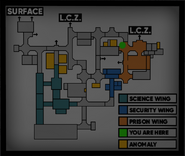 An outdated in-game Map. It was moved to the Doorman's storage room in b.0.1.9

(Click on the map boxes to view their respective page.)

Community content is available under CC-BY-SA unless otherwise noted.
Advertisement