Note: Changes not mentioned in the update's changelog are marked with an asterisk* at the end 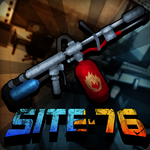 A Mobile Task Force Unit with the updated MTF Helmet

Teaser showing the Flamethrower and Minigun