Site 76 Wiki
Register
Don't have an account?
Sign In
Advertisement
in: Pages that need to be improved, Anomalies, Medium-Threat Anomalies, Playable anomalies

Cleanup Needed
⚠️This page has been marked for a cleanup or complete page rewrite.

Turning people into the Undead/Cured

Get Killed by a Player-Controlled Plague Doctor

The Plague Doctor is a sentient and violent humanoid medium-threat anomaly contained and located inside the Heavy Containment Zone. It is one of the playable anomalies.

The Plague Doctor resembles a 17th-19th century European plague doctor that treated the Bubonic Plague, but there's a twist. This is no normal Plague Doctor, this is a doctor that turns organisms to zombies. The disease he is trying to cure is called the "Pestilence." Instead of curing, his fatal touch turns living things to a mindless zombie, or also known as, The Cured. The Doctor will chase the nearest player within attack range, moving at a moderate speed. When the Doctor makes contact with a player, the player will be immediately killed and the Doctor will play a fair-length animation (approximately 6 seconds) of operating on the player's body before reviving the player as a zombie. During this period, the Doctor cannot move or attack other players[1], however, it is still vulnerable to damage.[2] Once the animation is done and the Player Plague Doctor has fully cured them, the player will respawn as The Cured. If an NPC Plague Doctor cured a player, the player who got killed will just die and will not respawn as The Cured. However, the player's corpse will turn into The Cured and will be an NPC.

The Doctor has 5 voice-lines in its toolbar that can be played at any time [3]. A sixth unique voice-line can be triggered when a player wearing the Jade Ring touches the Doctor. The 6th unique voice-line is "Stop resisting....I am trying to cure you." If a player with the Jade Ring touches an NPC Plague Doctor, it will stop moving, and will trigger the voice-line. If someone touches a player Doctor with the Jade Ring on, the voice-line will play, but the Doctor will continue to move. When it's a Player Plague Doctor, the Jade Ring does not grant you 100% immunity from the infection, and you may get "cured" even if you have the ring on. The ring does not give you immunity to The Cured, whether if it's an NPC or a Player.

The Doctor's health as a player-controlled anomaly is 2000. For every single player the Doctor "cures", the player will receive $140 and 80 EXP. The Doctor will also gain 100 HP for each cure if their health isn't full.

The Plague Doctor's containment is located in the Heavy Containment Zone, guarded by Level-3 security clearance. It is between Burning Man and Shy Guy.

The Plague Doctor appears to be quarantined in a wide medium-large sized room. A normal metallic sliding door and thick glass are built to heavily secure him. His cell does not contain any advanced technology inside, but there is only one surveillance camera to monitor him. There is a heavy-duty cabinet for him to store his stuff, but it seems he doesn't use the shelf. Since no janitors or any maintenance team are allowed in the cell, the confinement looks as if the room hasn't been cleaned for years. The cell looks like a decaying solitary confinement cell that came from a abandoned asylum. The windows from the inside view are very dirty, and has a poor viewing quality; the windows on the Observation Room's perspective is clean. No food or liquid resources, beds, bathrooms, etc. are provided for him.

In the Observation Room, there are computers, a Plague Doctor Control Pole, and other utilities. Scientists have the authority to watch and study the Plague Doctor. The Observation Room is clean, unlike his containment cell. If you listen, you can hear the Doctor's breathing ambience in the room. Any containment failures or getting exposed from the Doctor's viral infection will result in immediate termination.

When stunned, The Doctor will fall to the ground on one knee, showing signs of pain and/or injury. If the Doctor is stunned and sufficient time has passed without them being re-contained, the Doctor will get back up, restore their health bar, and become active again[4].

"I can assure you, my cure is most effective."

"I sense the disease in you."

"I can see you are not well, the sickness has taken ahold of you."

"Stop resisting... I am trying to cure you." (This audio is used when a player uses the Jade Ring to resist the NPC Plague Doctor's touch)

There are currently 3 available Badges related to the the Plague Doctor: 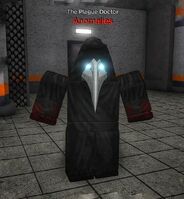 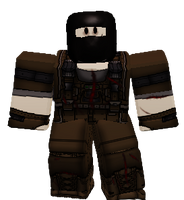 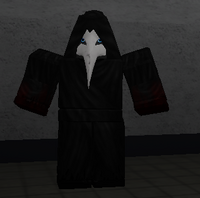 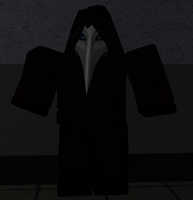 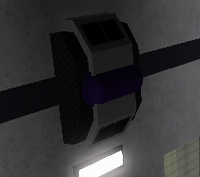