The Shy Guy is a High-Threat Anomaly contained within Heavy Containment. It is one of the playable anomalies and stands as the most expensive to play as.

The Shy Guy is a tall, toothless, and slender humanoid. It walks very slow most of the time, but is capable of traveling extremely high-speeds when provoked, and will terminate anyone who views its face.

When breached, the Shy Guy will walk slowly and roam around Site-76, which is known as his docile state. He will cover his face and cry at the same time. If a player come across Shy Guy and views his face, it will enter a stage of considerable emotional distress, and the target's body will be pinpointed with a red skull, which is the same one as Contract Killer.

Shy Guy's eyes will turn darkish-red; he will start crying, screaming, and babbling incoherently. He will receive damage reduction of 50% during his windup from weapons, but not at any point after that. During this period he is unable to move temporarily

Once his mobilization period is done, which lasts 6 seconds, Shy Guy will scream whilst running fast and attempt to find/kill the person who saw its face. If the Shy Guy is player-controlled, they will have a rage meter (Similar to Zombie Pathogen, Wendigo Skull) that will fill up and will decrease gradually over time, but will regen if more targets are detected. The victim will start to hear chasing ambience throughout the pursuit.

If the Shy Guy manages to hit their victim by violently slashing them with its claws, it will instantly kill the player. For every kill, the player Shy Guy will be rewarded $50, 20 EXP. Once all of his targets are eliminated or his rage meter runs out, the Shy Guy will automatically relax, and will lose track of all his targets, but will return to hostile if someone saw his face again. If the Player-Controlled Shy Guy would like to cancel their enragement and spare the victim's life, they will be able to use their first ability.

Shy Guy's Containment Chamber is located in the Heavy Containment (HC 2-1), between the Plague Doctor's Containment and The Toxic Waste Disposal. He appears to be sealed inside an airtight steel container, that is shaped as a 3D cube. There is absolutely no direct video or physical surveillance inside his cell under any circumstances; instead, there are sonar emissions that will detect if he's contained or not. There is also a control station which is where the breach button is located and a TV showing the amount of stuns Shy Guy has received.

Shy Guy's re-containment procedure is similar to the Old Man's. The Shy Guy must be stunned three times before it can, finally, be contained by using the Bag and holding the E Key. This applies to both the NPC and player-controlled Shy Guy. When he is stunned, he will kneel on the floor/paralyzed temporarily, and will lose track of all his targets.

Shy Guy calming down after enragement. Revealed on the YGW Twitter 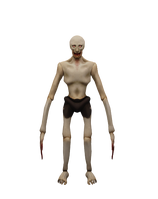 Shy Guy after being bagged 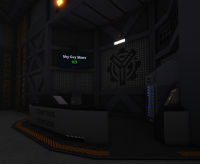 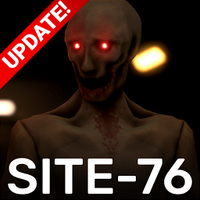 Shy Guy in a Site-76 Icon.
Community content is available under CC-BY-SA unless otherwise noted.
Advertisement