The Suit Man is a high-threat anomaly and is unique in the fact that it has no containment chamber and can not be contained.

The Suit Man resembles a human male and is dressed in a black business suit and a fedora of the same color. The Suit Man uses the same uniform as an Overseer and is faceless but does have indentations where its mouth would be.

He can occasionally be seen walking at a medium pace through hallways in certain parts of Site-76.

The Suit Man only appears to the viewer and cannot be seen by other players who are in the locations that he walks through, even if from the viewer's perspective they can be seen walking next to him.

If the player tries to follow the Suit Man, they will notice that he has disappeared and is no longer there. If the viewer manages to catch up to the Suit Man fast enough, he can be seen disintegrating into a cloud of smoke.

There are six locations where the Suit Man can be seen:

Players that view the Suit Man in all six of his locations earn the badge, "Am I... Dreaming? 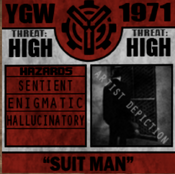 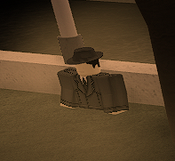 Close up of Suit Man stuck in the ground. 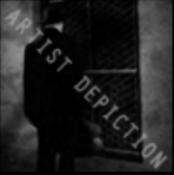 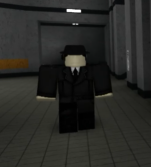 A closer up image of Suit Man 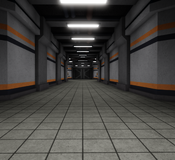 The surface, by Gate B elevators

The opposite side of the overseer windows '

Opposite side of the security spawn's windows
Community content is available under CC-BY-SA unless otherwise noted.
Advertisement