Depends on the player's weapon

(Must be a Prisoner)

Weapons
The Mask is a high-threat anomaly located in the Heavy Containment Zone. It is one of the playable anomalies, but can only be used by Prisoners. It is unique as it is the only anomaly that can escape the Site.

The Mask is a Roman comedy mask that emits unknown fluids from the eyes and mouth. When a Prisoner puts on the mask their max health is raised to 200 HP. The player wearing The Mask cannot participate in Heists nor release other anomalies, but the player can use regular weapons, use Ammo Cans, and most importantly known for granting the immunity to other anomalies. The user will be subjected to the Anomalies team as The Mask. If a player escapes as The Mask, they will get $1,500 and 725 EXP.

The Mask is one of the hardest anomalies to contain and successfully secure due to its corrosive effects. The Mask requires the utmost protection, as seen with the Level 5 Clearance needed to open the box. Once it's on on the player's face, there's no turning back, unless if the host dies.

The Mask's Containment Cell is located in the Heavy Containment Zone. It is housed in a medium sized room that appears to be corroding as shown by the floor and walls. The Mask is locked up in a sealed container that is shielded with strong metallic iron-boarded windows, and a keycard identifier attached. The sealed container is controlled by a rope, it can either rise to the roof, or fall to the ground. The rope is controlled by a green button in the observation room.

In the Observation Room, there are tables and windows for observing the Mask. The windows are corroded, making it hard to observe.

DO NOT use the Taser or Handcuffs to counter The Mask. It is immune to Taser and Handcuffs since it's an anomaly. 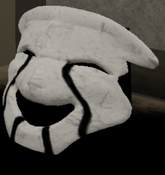 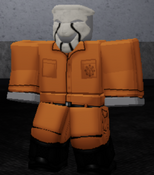 Prisoner with the old Mask model 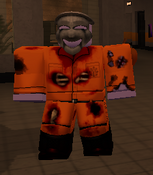 Prisoner with the current Mask model

The Mask with its containment open 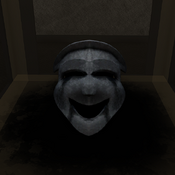 A closer image of the mask
Community content is available under CC-BY-SA unless otherwise noted.
Advertisement