The Sculpture is a sentient and violent roughly humanoid statue made primarily composed of concrete and rebar. It is extremely hostile and animate, rushing to the nearest player at high speeds. It kills via snapping at the base of the neck. However, is unable to move while being watched. This is by far the most hated anomaly.

The Sculpture is unable to move or attack when within a direct line of sight of a player. Players must have their characters facing directly at The Sculpture for it to work. Viewing the anomaly with the 3rd person camera does not count. When not being viewed, or if the viewer is blinking, the anomaly will rush towards the nearest player at a high speed and instantly kill them upon making contact. The Sculpture will be locked in place whenever stumbling upon one or more instances of the Eye Pods anomaly.

Like other NPC anomalies, The Sculpture will teleport near players if there are none in its immediate area.

The Sculpture appears to be locked up in a huge metallic room. There are two heavy-duty gates and strong metallic rusted walls for sealing The Sculpture. No buttons are allowed to be in the cell at all times; there can only be a button outside the cell. This gate must remain shut at all times, and further researching or testing inside the cell is prohibited. The containment chamber contains multiple dirty bloody stains and feces on the floor. There are also two brooms outside its containment insinuating that the cell is possibly cleaned from time to time, for the outside of the room there is a observation area and on the side there's a hanger this was most likely taken from SCP: Containment Breach where the Security Guard would stand, there is a single job Terminal located there but no shop terminal.

The most reliable way of re-containing The Sculpture is with normal firearms. Keep in mind that this takes a bit of time, but is the most common and easiest way of doing so. Some more situational solutions can also be used to contain the Sculpture much quicker. The Explosive Bat can be used to destroy The Sculpture with only 3 hits which makes it very effective, but is unlikely to help anyone not prepared to encounter the Sculpture. Another good tool is use a Rocket Launcher. This however, comes with the downside of it costing a lot of money since the Rocket Launcher itself is worth over $100,000 and the cost of Rockets can quickly add up.

Another tool that can assist in containing the Sculpture are the Eye Pods. The Eye Pods themselves, can not contain the Sculpture, but they give some time for the player to damage it or escape. Remember that the Eye Pods will only stay for around a minute, so it is best to be prepared for when they leave. The Stony Gaze perk is also useful as it doubles the time players take to blink, making it easier to avoid The Sculpture.

It is recommended not to use melee weapons, fists, or a Flamethrower to contain the Sculpture. Having multiple people to cover you is a good way to protect yourself from the anomaly. More eyes, more protection.

Currently there are 3 Badges available for The Sculpture:

Transparent image of The Sculpture

Item dropped by The Sculpture when destroyed with the Explosive Bat 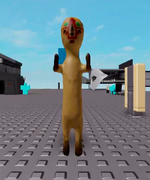 The Sculpture with a christmas hat without the present while in the Christmas event
Community content is available under CC-BY-SA unless otherwise noted.
Advertisement