Bite a player and turn it into a Feral Vampire

Holiday Exclusive
This page details a piece of Holiday exclusive content that may not be currently obtainable.

Or 36 per Hit with Brawler

Free, must be bitten or drink Scarlet Potion

The Vampire is an original anomaly, exclusive to the Spooktober event. It is located in Heavy Containment between the Shadow Child and the Burning Man's containment chambers.

Once The Vampire has breached, it will chase the nearest player to attempt to bite them. After The Vampire bites a player, it will use its ability to run away. The anomaly emits a red aura which makes it easy to detect as seen in the infobox.

If a player is bitten, they will be turned into a Feral Vampire. They have 500 Health Points and need blood to survive. If they do not fill up their blood bar by killing people, they will slowly lose health until they reach 1 HP, similar to the Zombie Pathogen. Feral Vampires have an ability that temporarily makes them immune to damage. They cannot bite other players.

The Vampire's containment chamber is at the intersection of the Burning Man and the Shadow Child.

There are 2 Badges related to the The Vampire:

The Vampire containment chamber before and after Spooktober 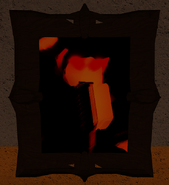 Employee of the Month's frame during Spooktober
Community content is available under CC-BY-SA unless otherwise noted.
Advertisement